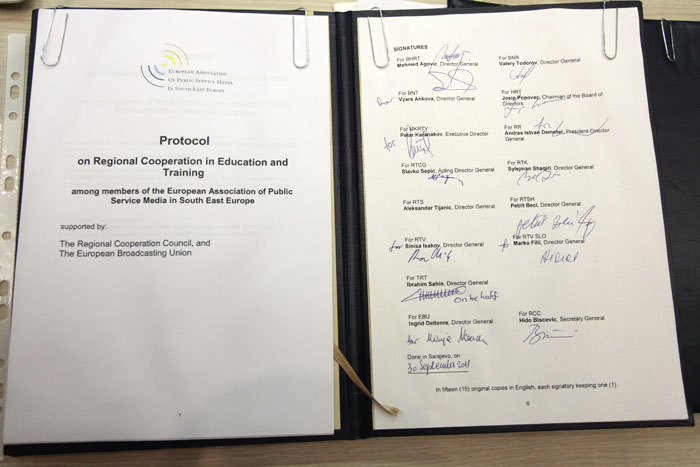 Protocol on Regional Cooperation in Education and Training among members of the European Association of Public Service Media in South East Europe, signed on 30 September 2011 in Sarajevo, BiH. (Photo RCC/Dado Ruvic)

SARAJEVO, 30 September 2011 – Directors general of 12 public broadcasters signed today in Sarajevo a Protocol on Regional Cooperation in Education and Training among members of the European Association of Public Service Media in South East Europe, under the auspices of the Regional Cooperation Council (RCC) Secretariat.

The event was co-organized by the Association, the Radio-Television of Bosnia and Herzegovina (BHRT), and the RCC Secretariat.

In his opening address, Hido Biscevic, RCC Secretary General, said that the signing of the Protocol is a proof that, regardless of oscillations in political and socio-economic conditions in South East Europe, the region has continued moving forward.

“Education and training are key to ensuring market competitiveness, as only the well-trained staff are able to keep abreast with technological and societal challenges of the fast developing world, and as such can fulfill the public service remit of the members of the Association.”

The Protocol sets a number of important objectives, such as raising professional standards and quality, efficiency and editorial independence of the public service media; fostering and strengthening reliability, diversity and respect for all layers of society; identifying best practices and innovation; actively contributing to building common training and education policy; and exploring opportunities and pursuing joint initiatives to promote greater competitiveness of public service media.

Josip Popovac, President of the European Association of Public Service Media in South East Europe and Director General of the Croatian Radio-Television, underlined that today we have witnessed the signing of an important document.

“This document demonstrates the seriousness and commitment of the public service media of our region in fulfilling our basic function – the service to the people – this time specifically through education and training. The support of the RCC, the European Commission and the EBU in this respect is extremely valuable.”

The aim of the agreement is to enable staff at all levels to meet present and future challenges; and strengthen contribution of the public service media to the development of modern, democratic societies in South East Europe, through a set of activities enhancing the public service remit of the signatories.

Mehmed Agovic, Director General of the Radio-Television of Bosnia and Herzegovina, highlighted the extraordinary importance of the Protocol for strengthening the mission and credibility of the public service media in South East Europe.

“For us, at the BHRT, the Protocol provides a possibility to keep abreast with technological advances in the field of electronic media and be ready to work in a digital environment.”

The signing of the Protocol was supported by the European Broadcasting Union (EBU). A European Union representative also took part in the meeting.

The third Meeting of the Education Committee of the Association was held in advance of the Protocol signing, on 29 September 2011.

The Protocol on Regional Cooperation in Education and Training among members of the European Association of Public Service Media in South East Europe is available HERE.