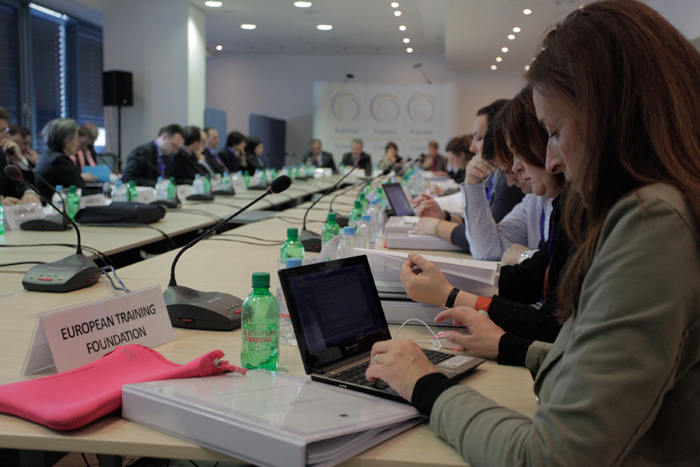 SARAJEVO – The Southeast Europe Investment Committee (SEEIC) adopted its two-year Work Programme for 2012-2013 in Sarajevo today, at the first meeting held under the umbrella of the Regional Cooperation Council (RCC) Secretariat.

The Work Programme seeks to create and implement a common vision for economic development in South East Europe (SEE) by 2020; increase competitiveness of the region through supporting linkages between business companies; and present the region as an attractive investment destination.

In his opening remarks, Hido Biščević, RCC Secretary General, emphasized that SEEIC could help the SEE governments come together around a set of regional headline targets that the Investment Committee can help formulate and implement.

“The Ministerial Conference of November last year has empowered the SEEIC to engage in the SEE 2020 Vision building and has taken political commitments that we intend to pursue going forward. The SEE 2020 Vision opens up a possibility for regional initiatives to associate themselves more closely with the Europe 2020 strategy. It could also help provide a framework for intervention for the Multi-Beneficiary Instrument for Pre-accession Assistance (IPA), as well as for other donors engaged in regional interventions.”

Genci Mucaj, Director General at the Ministry of Foreign Affairs of Albania, and SEEIC Co-chair, extended full support to the future work of SEEIC under the RCC umbrella, and to its 2-year Work Programme, adding that the transfer of the SEEIC from the Organisation for Economic Co-operation and Development (OECD) to the RCC is a major regional achievement, which shows trust and reliability of the RCC.

“SEEIC efforts will produce results only if they are nurtured within our members, and I call upon Country Economic Team leaders within the SEEIC for close cooperation and strong communication and linkages with all stakeholders in this venture. Their expertise and resources are sought in shaping joint regional policies and priorities, enhancing regional value chains and processing determined goals into realities on the ground, that are to be quantified by the end of 2012.”

In cooperation with the European Commission (EC), the meeting included a session on programming the regional component of the Instrument for Pre-accession Assistance (IPA), dedicated to private sector development.

“The EC supports the SEE 2020 Vision and the Investment Committee, as its role remains important in taking the regional cooperation and policies forward, especially in view of a difficult economic situation in Europe”, said Yngve Engstroem, Head of the Regional Programmes Unit at the European Commission’s Directorate General for Enlargement, while addressing the meeting.

“The countries in the Western Balkans need to define a new and sustainable growth model, to ensure that the region’s companies continue to have access to capital, and that the region attracts foreign investment. ‘Innovation’ will be key to stimulating and sustaining the growth. From our perspective, this work can be used for our own interventions and for having a better informed opinion on the countries’ progress towards accession.”

The meeting brought together SEEIC members from the region, national IPA coordinators, as well as representatives of international organizations, investment promotion agencies, donors and business community.

The SEEIC was officially launched at the Ministerial Conference of the South East Europe Compact for Reform, Investment, Integrity and Growth (Investment Compact) in Vienna on 27 June 2006. Its members are Albania, Bosnia and Herzegovina, Bulgaria, Croatia, Moldova, Montenegro, Romania, Serbia and The Former Yugoslav Republic of Macedonia, with Kosovo* as an observer. Comprised of senior economic officials and their advisors, it represents a high-level coordination body, tasked with enhancing regional leadership for common strategies in the field of competitiveness and investment-related reform. The RCC Secretariat took over the management of the SEEIC from the OECD in November 2011, and currently co-chairs the Committee with Albania.

More information on the meeting.