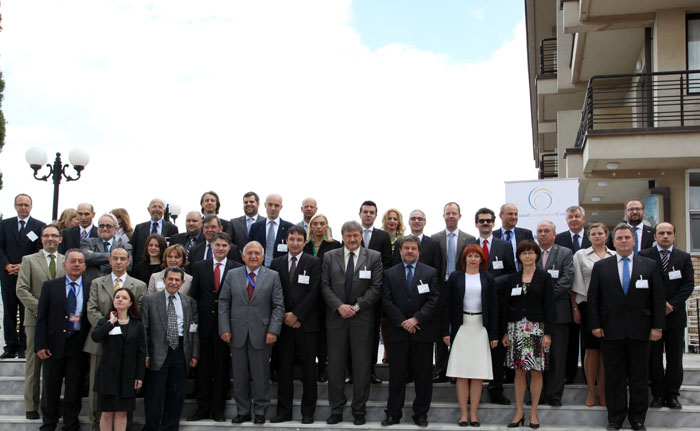 Participants of the fifth RCC Annual Meeting held on 30 May 2013 in Ohrid. (Photo RCC/Ljupcho Blagoevski)

OHRID/SARAJEVO – The Regional Cooperation Council (RCC) is a key forum for inclusive regional cooperation in South East Europe, participants of the 5th Annual Meeting of the organization agreed in Ohrid today, while endorsing its new strategy for the 2014-2016 period and the annual report of the RCC Secretary General.

Presenting the report and the strategy, Goran Svilanović, RCC Secretary General, said the ability to ensure all-inclusiveness in its activities is one of the most important achievements of the organization.

“The RCC is the only organization that is all-inclusive as a result of consensus by all its participants. The all-inclusiveness in the RCC work is a major step forward towards strengthening regional stability. It reconfirms dialogue as the only way to solve open issues.”

Foreign Minister Poposki congratulated the RCC on its 5th anniversary and expressed thanks for excellent cooperation during his country’s South-East European Cooperation Process (SEECP) Chairmanship-in-Office. He fully supported the RCC’s annual report and the new strategy, highlighting cooperation in the fields of science and culture.

The flagship RCC initiative in this respect is SEE 2020 – a Job-Creating Growth and EU Integration Strategy for South East Europe, currently being developed.

“The goal of the strategy is to improve living conditions and bring back competitiveness in the region’s focus. Its implementation will depend on the capacity of national administrations to absorb reforms, which is why their engagement is a key to success.”

“I am convinced that the SEE 2020 strategy will be beneficial for all of us”, said Minister Poposki.

“We are determined to forge a strategic partnership for development and prosperity in South East Europe, by complementing national strategies with a regional approach. We can attain sustainable economic and social development only by undertaking joint efforts at the national and regional level. Such strategies are a necessity for the region.”

The document leans on the EU strategy Europe 2020 and it is to be adopted by the region’s ministers of economy in November 2013.

The event, co-chaired by the RCC Secretary General Goran Svilanovic and Foreign Minister Nikola Poposki, on behalf of the current chair of the SEECP, discussed developments in regional cooperation in South East Europe, as well as challenges ahead of the organization.

Earlier in the week, the SEECP Speakers of Parliament agreed to establish a SEECP Parliamentary Assembly. The constitutive session is expected to be held during the next, Romanian, Chairmanship-in-Office of the SEECP. The RCC has supported the process and will continue to do so, in line with its Strategy and Work Programme 2014-2016.

The RCC Annual Meeting – the gathering of the 46 participants of the organization – was co-organized by the SEECP Chairmanship-in-Office and the RCC Secretariat. It meets at the level of senior civil servants or above. It ensures the strategic coordination and development of regional cooperation processes, reviews and endorses the organization’s strategy and the Secretary General’s Annual Report on regional cooperation.

For further information, please see the 2012-2013 Annual Report of the RCC Secretary General on regional cooperation in South East Europe and the RCC Strategy and Work Programme 2014-2016, as well as Annual Meeting materials (agenda, programme, list of participants, etc.).