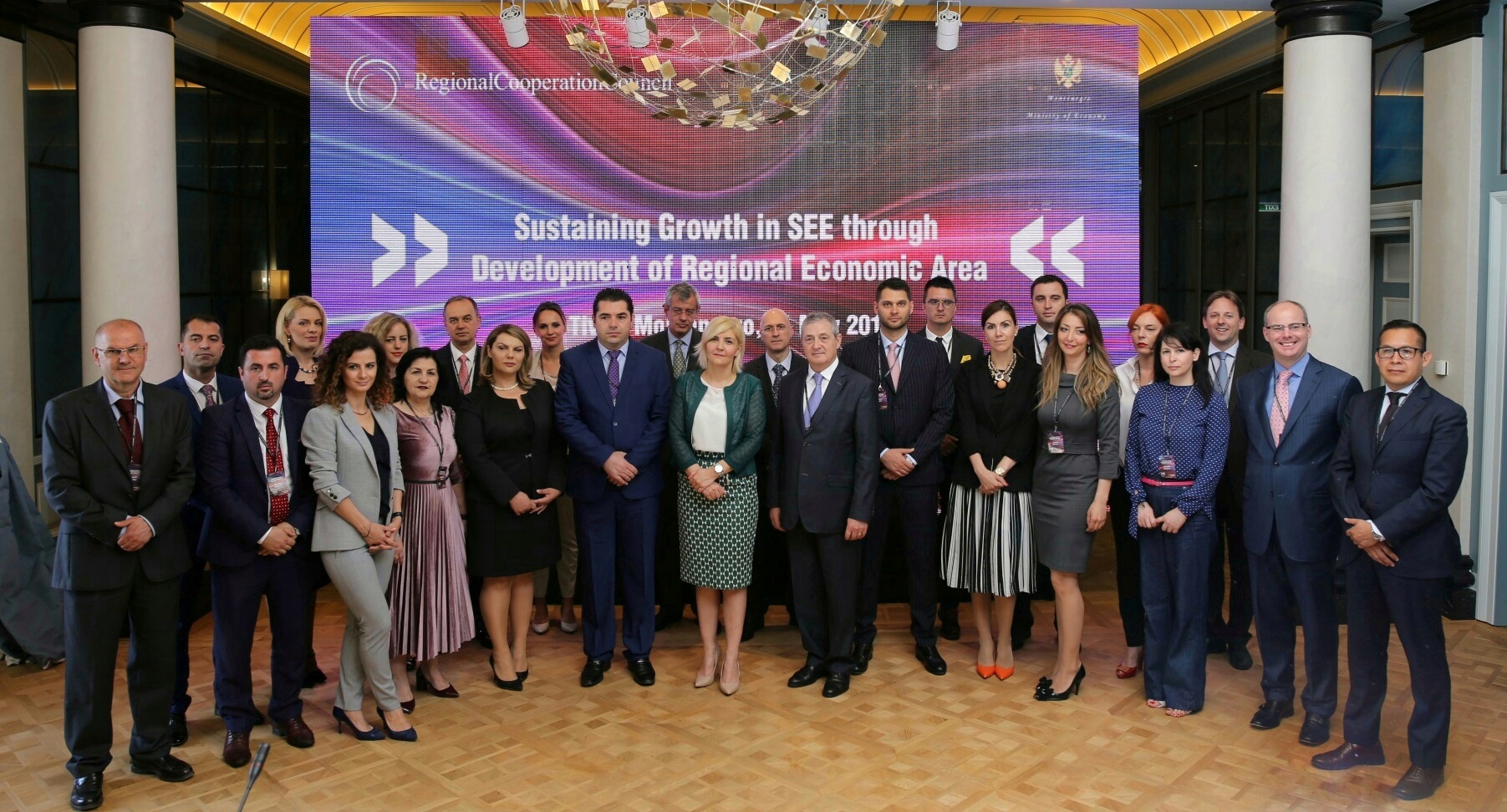 Participants of the SEEIC ministerial meeting held on 11 May 2018 in Tivat, Montenegro. (Photo: RCC/Radonja Srdanovic)

The goal of the RIRA is greater harmonization of WB6 investment policies with the European Union (EU) standards and international best practices, within the framework of the SEE 2020 Strategy, Central European Free Trade Agreement (CEFTA) and EU pre-accession and accession processes.

Dragica Sekulić, Minister of Economy of Montenegro addressed the meeting as the host, expressing satisfaction over finalisation of this major step in implementation of the  Multiannual Action Plan on Regional Economic Area (MAP REA), adopted by the region’s Prime Ministers at the WB6 Summit in Trieste last July.

“This document sets grounds for serious work on the investment reform agenda of individual WB economies but also put the region in a competitive and investment-friendly perspective, thus enabling the region to become attractive investment destination but also gives individual economies opportunity to utilise comparative advantages of this process.”

Gazmend Turdiu, Deputy Secretary General of the Regional Cooperation Council (RCC) commended the region for its asserted commitment to implement and monitor the priorities stipulated by the MAP REA. He added that the ultimate goal of RIRA is to improve the attractiveness of the region for foreign and intra-regional business, and hence facilitate higher inflow of investments and generate higher entrepreneurial activity, trade, and ultimately jobs.

„RIRA sets out the pathway for creating a dynamic investment space in the WB6, putting the priorities of the private sector at the centre stage, while also recognizing the individual development priorities of the WB6 economies. This is a process, and we are all together the owners of it. This ownership includes responsibility and that is why we need to maintain strong coordination of our capacities and resources so that we can successfully address the challenges ahead of us. “

After today’s endorsement the RIRA will be forwarded to presentation, consideration and approval of the region’s Prime Ministers at the occasions of the upcoming WB6 Summits in Sofia and London, taking place on 17 May 2018 and 10 July 2018, respectively.

The meeting participants endorsed the Ministerial Statement, which will pave the way for the future actions of our region in improving its investment environment, industrial development, access to finance, and support to the strategic sectors. They recognised the leading role of the SEEIC-CEFTA Joint Working Group on Investments as the main regional platform for implementation of measures stipulated by the MAP REA pillar on investments, while also supporting SEEIC economies to prepare and implement individual-economy plans and reforms in accordance with RIRA and invited them to continue close cooperation and coordination on individual-economy levels with MAP REA Coordinators and relevant line institutions for its effective implementation.

The ministerial meeting that gathered regional Ministers, Assistant Ministers of Economy as well as senior officials in charge of investment portfolios from the region, was co-organised by the Ministry of Economy of Montenegro and the Regional Cooperation Council.