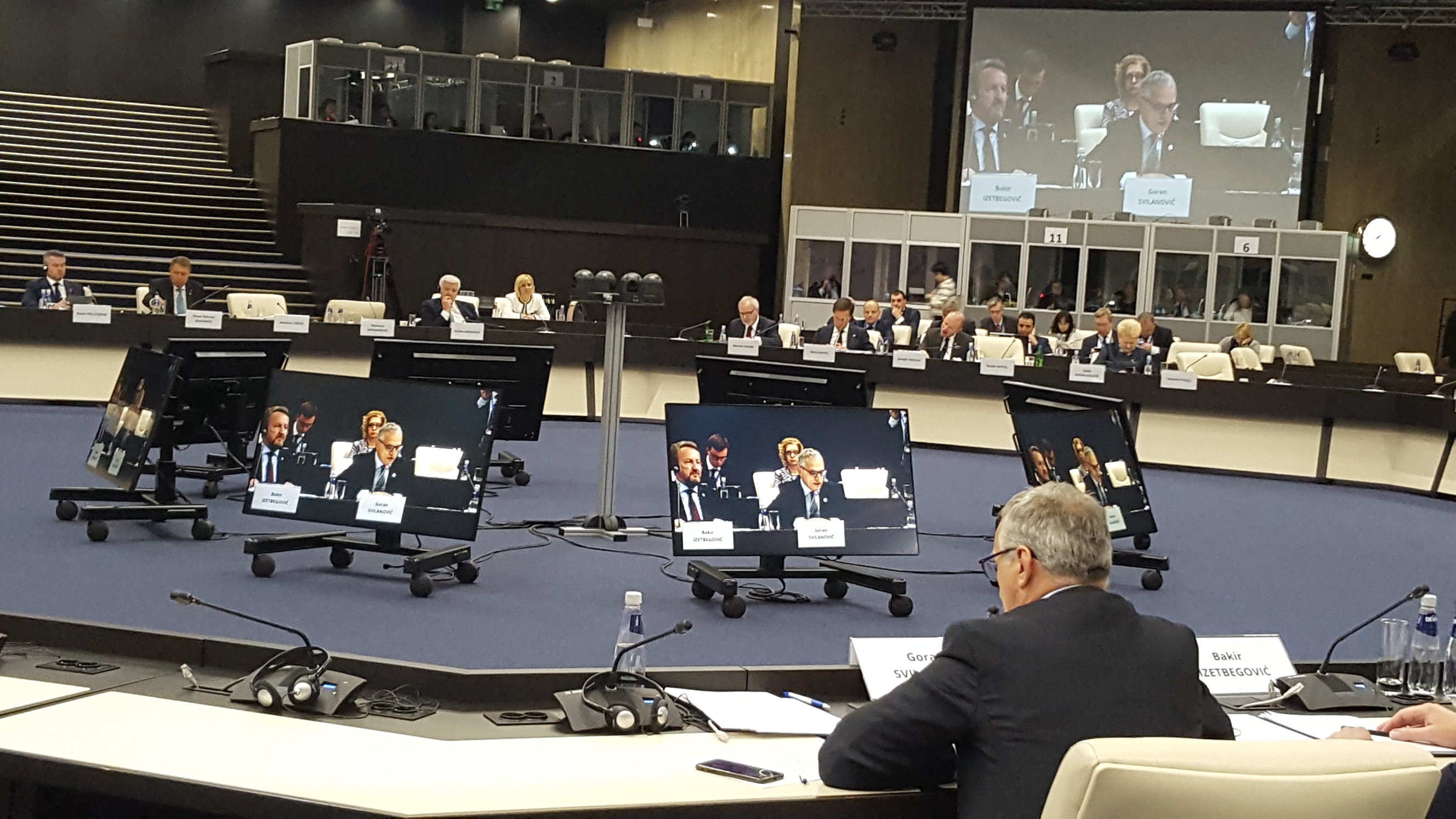 RCC Secretary General Goran Svilanovic speaking at the EU-Western Balkans Summit hosted by the Bulgarian Presidency of the Council of the EU, in Sofia on 17 May 2018. (Photo: Vesselin Valkanov) 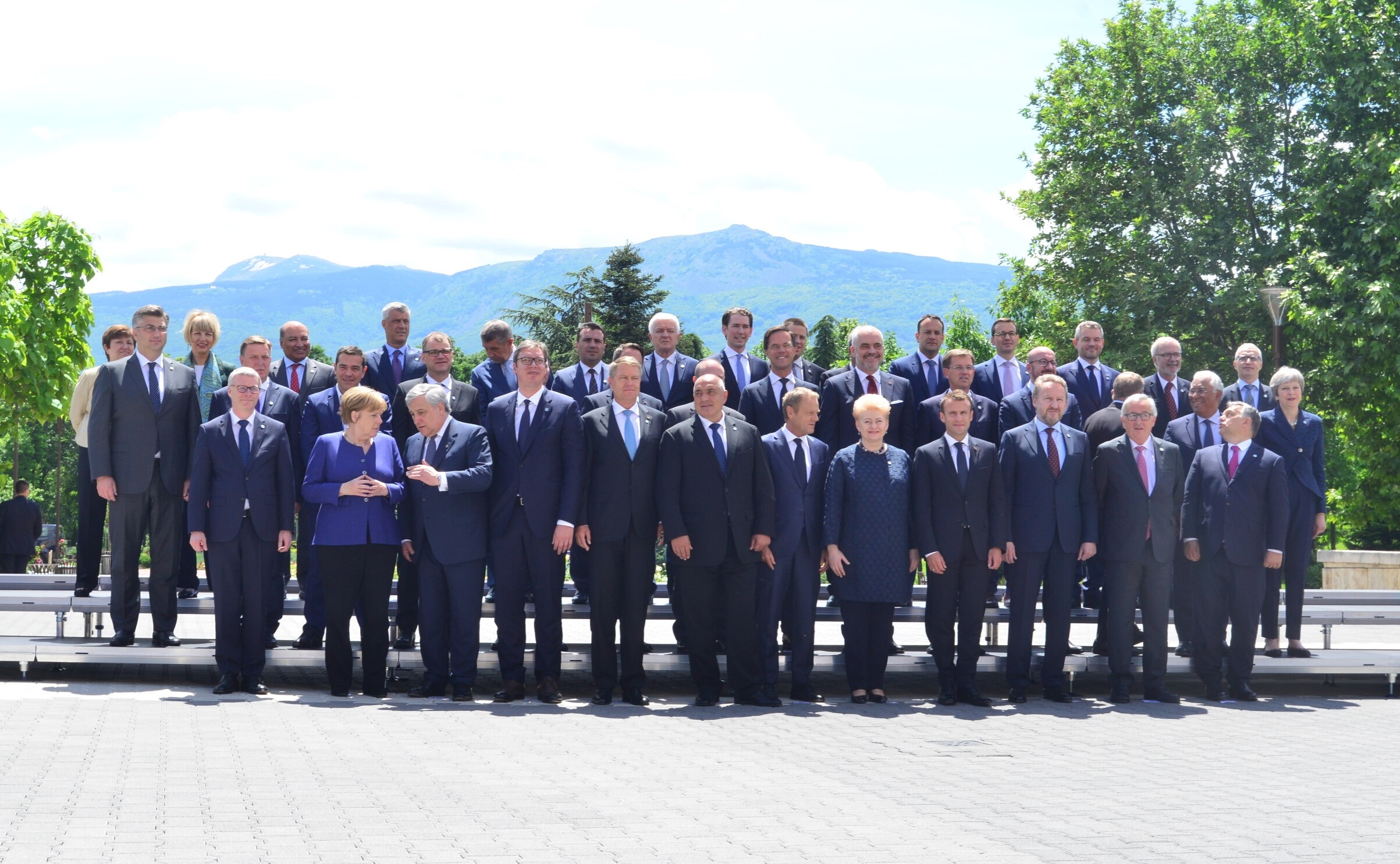 Participants of the EU-Western Balkans Summit hosted by the Bulgarian Presidency of the Council of the EU, in Sofia on 17 May 2018. RCC Secretary General Goran Svilanovic - top row, first one on the right. (Photo: Yordan Simeonov (EU2018BG))

Sofia – The Secretary General of the Regional Cooperation Council, Goran Svilanovic, took part at the EU-Western Balkans Summit hosted by the Bulgarian Presidency of the Council of the EU, in Sofia today. The Summit is dedicated to strengthen links between the EU and the Western Balkans in infrastructure, digital and human connectivity. It brought together EU and WB leaders, as well as representatives of the World Bank, EBRD, EIB and RCC, as the only regional inter-governmental organisation that was invited to address the Summit.

Speaking at the Summit, the Secretary General Svilanovic welcomed EU and WB leaders’ call for stepping up efforts to implement Multiannual Action Plan for Regional Economic Area (MAP REA), operationalising some of its measures, adding that the RCC so far has had a decisive role in supporting mobility, economic and digital connectivity within WB and with the EU.

“It was precisely RCC’s SEE2020 Strategy, collaboration on regional connectivity agenda, the youth agenda and as of last year the MAP REA that proliferated regional cooperation across all sectors and created the ‘web of connections and opportunities within the region and with the EU that is vital for bringing our citizens and economies closer together, and for enhancing political stability, economic prosperity, cultural and social development’ – as referred to in the Sofia Summit Declaration.”

He went on by saying that the RCC’s serious capacities, frameworks and facilitated processes enabled the advancement of activities and regional agendas from MAP REA.

“From baseline analysis, diagnostics, consultations, negotiations, validations to agreements and endorsements we have jointly moved quite a few REA agendas from point A to Z. And those advancements were not in the easiest of agendas, unburdened by the complexities of our region, such as investments, recognition of qualifications.”

Summarising activities undertaken since the adoption of MAP REA, Svilanovic presented the main implementation results presented in the draft MAP REA Implementation Report, based on the inputs received from WB economies, covering topics facilitated by the RCC: Investment, Mobility and Digital Integration.

He concluded by saying that although MAP REA was finally well-internalized, with commitment across all levels and in an ongoing implementation phase, it needed more projects and interventions so its implementation could advance further.

The WB leaders adopted the Statement of Support to the Digital Agenda for the Western Balkans. The Statement refers to the lowering of roaming costs; deployment of broadband; development of eGovernment, eProcurement, eHealth, and digital skill; capacity building in digital trust and security, in parallel to efforts to enhance digitalisation of industries; and the adoption, implementation and enforcement of the acquis.

Later today in Sofia the RCC Secretary General will take part in the “Strategic Dialogue on the Western Balkans” organized by the World Economic Forum.  The event is gathering EU and WB leaders, representatives from the public and private sector, and young people, to discuss how to unlock the region’s full potential through fostering public-private partnership.

More information on the Summit is available at the Summit web-page: http://www.consilium.europa.eu/en/meetings/international-summit/2018/05/17/