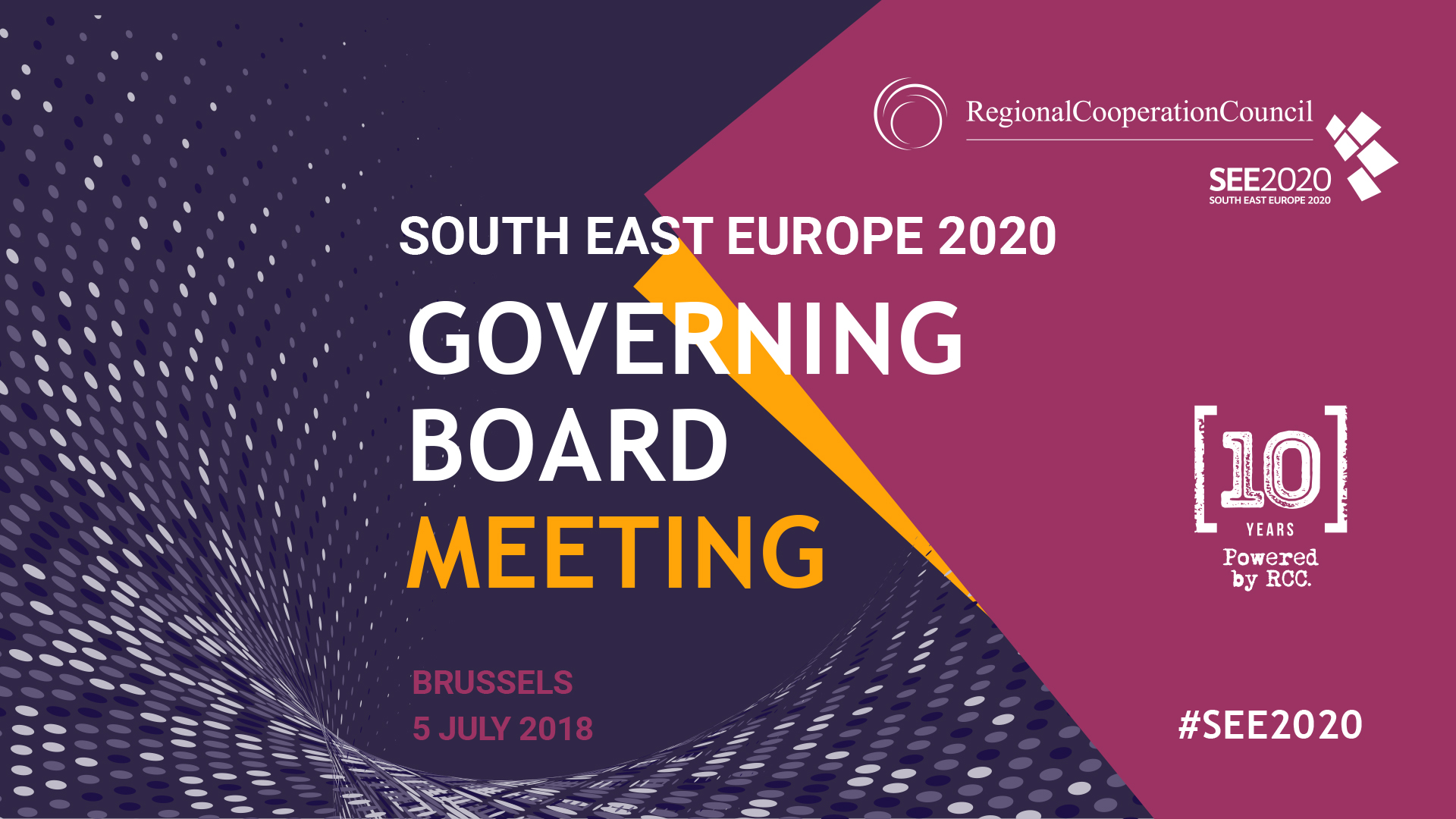 5th Meeting of the SEE2020 Governing Board 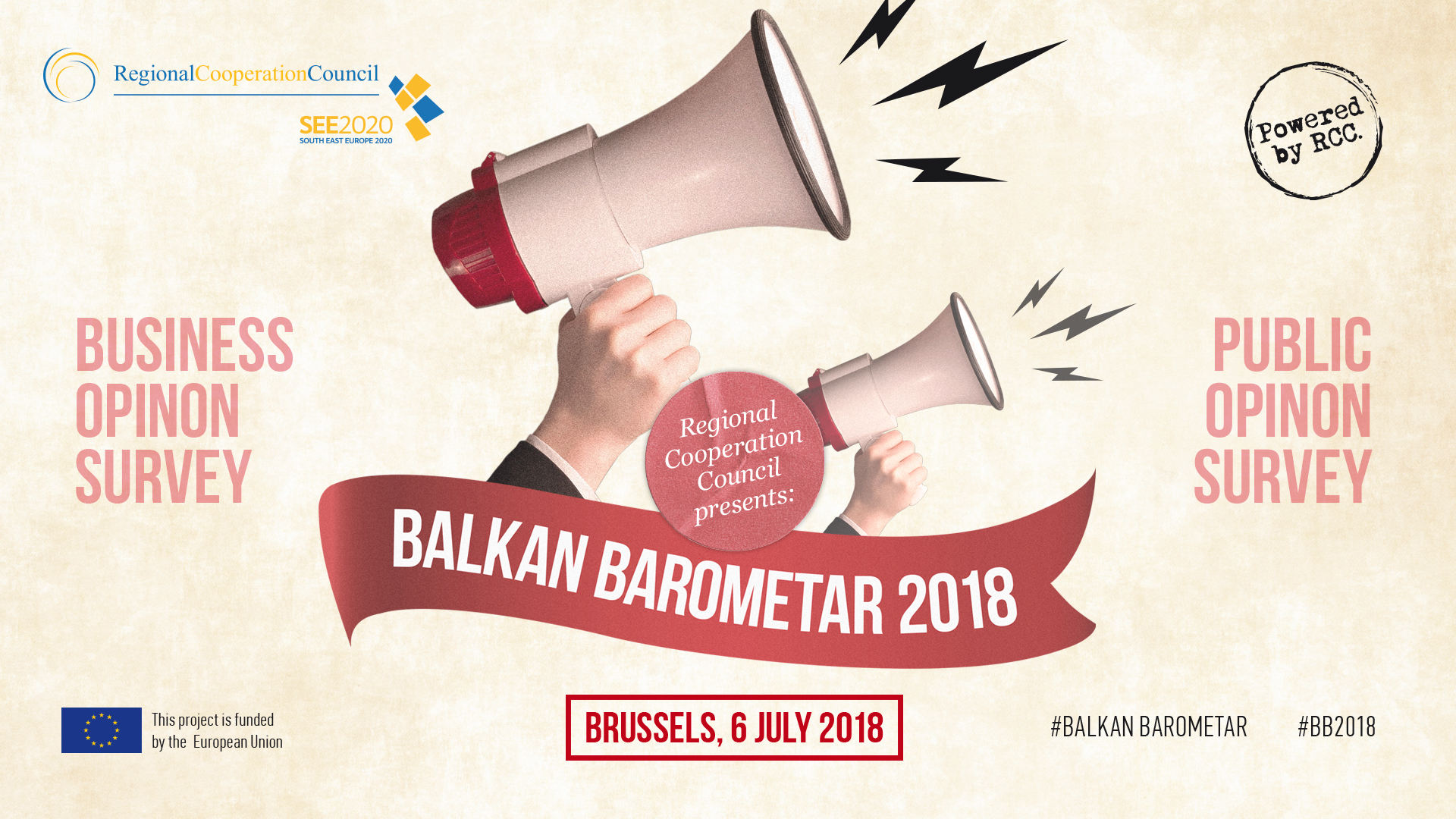 Brussels – The Regional Cooperation Council (RCC) is to present the implementation results of the region’s growth strategy, South East Europe 2020 (SEE2020) on 5 July 2018 in Brussels, and day after, on 6 July also in Brussels, the RCC will reveal the results of its 4th edition of the public and business opinion survey – Balkan Barometer 2018. Both are an integral part of the RCC’s monitoring mechanism on development and growth of the region, and together give an excellent overview of the situation, with SEE2020 implementation results showing the outcomes of comprehensive reforms each economy is doing, and Balkan Barometer giving an insight on people’s and businesses opinions of those reforms and their outcomes.

Presentation of South East Europe 2020 (SEE 2020) Strategy implementation results, Thursday, 5 July, Brussels
On 5 July in Brussels, the RCC is organizing the 5th annual meeting the Governing Board of the RCC’s SEE 2020 Strategy, which is expected to adopt the Annual Report on Implementation (ARI) of the SEE 2020 Strategy, prepared by the RCC.
Media are cordially invited to cover the opening of the meeting taking place in Hotel Bloom, Rue Royale 250, in Brussels, on Thursday, 5 July 2018.
The programme, open for the media on 5th July, is as follows:
Presentation of Balkan Barometer 2018, Friday, 6 July, Brussels
The host, Goran Svilanovic, RCC Secretary General, and Genoveva Ruiz Calavera, Director for the Western Balkans at the European Commission’s (EC) Directorate-General for European Neighbourhood Policy and Enlargement Negotiations (DG NEAR), are to deliver welcome addresses that are to be followed by presentation of Balkan Barometer 2018 key findings by Vladimir Gligorov, GfK Expert Consultant, Researcher at the Vienna Institute for International Economic Studies.
The opening is to be followed by a panel discussion including: Valdrin Lluka, Minister of Economy Kosovo*; Hamdo Tinjak, Secretary of the Ministry of Foreign Trade and Economic Relations of Bosnia and Herzegovina; Dusan Reljic, Head of ‘Stiftung Wissenschaft und Politik’ at German Institute for International and Security Affairs; and Mario Holzner, Institute Deputy Director and Staff Economist at the Vienna Institute for International Economic Studies. The discussion will be moderated by Zvezdana Kovac, Executive Director of the Center for Democracy and Reconciliation in Southeast Europe.
Media representatives are welcome to cover and take part in the presentation of Balkan Barometer 2018, which will take place in NH Hotel Bloom, Rue Royale 250, in Brussels, on Friday, 6 July 2018, starting at 11.00 hrs. Those interested in covering the event can register by mail at press@rcc.int. Please be advised to arrive 20 minutes before beginning of the programme.
Balkan Barometer (BB) is an annual opinion survey commissioned by the RCC and conducted by GfK, collecting and analysing data from region's citizens and businesses across a variety of thematic areas such as employment, trade, investments, corruption, etc. Its 4th edition included 6000 citizens and 1200 companies in the course of 2017.
*This designation is without prejudice to positions on status, and is in line with UNSCR 1244/1999 and the ICJ Opinion on the Kosovo declaration of independence.