Bregu: Challenges in front of us in enhancing regional cooperation in time of uncertainty, will be even bigger 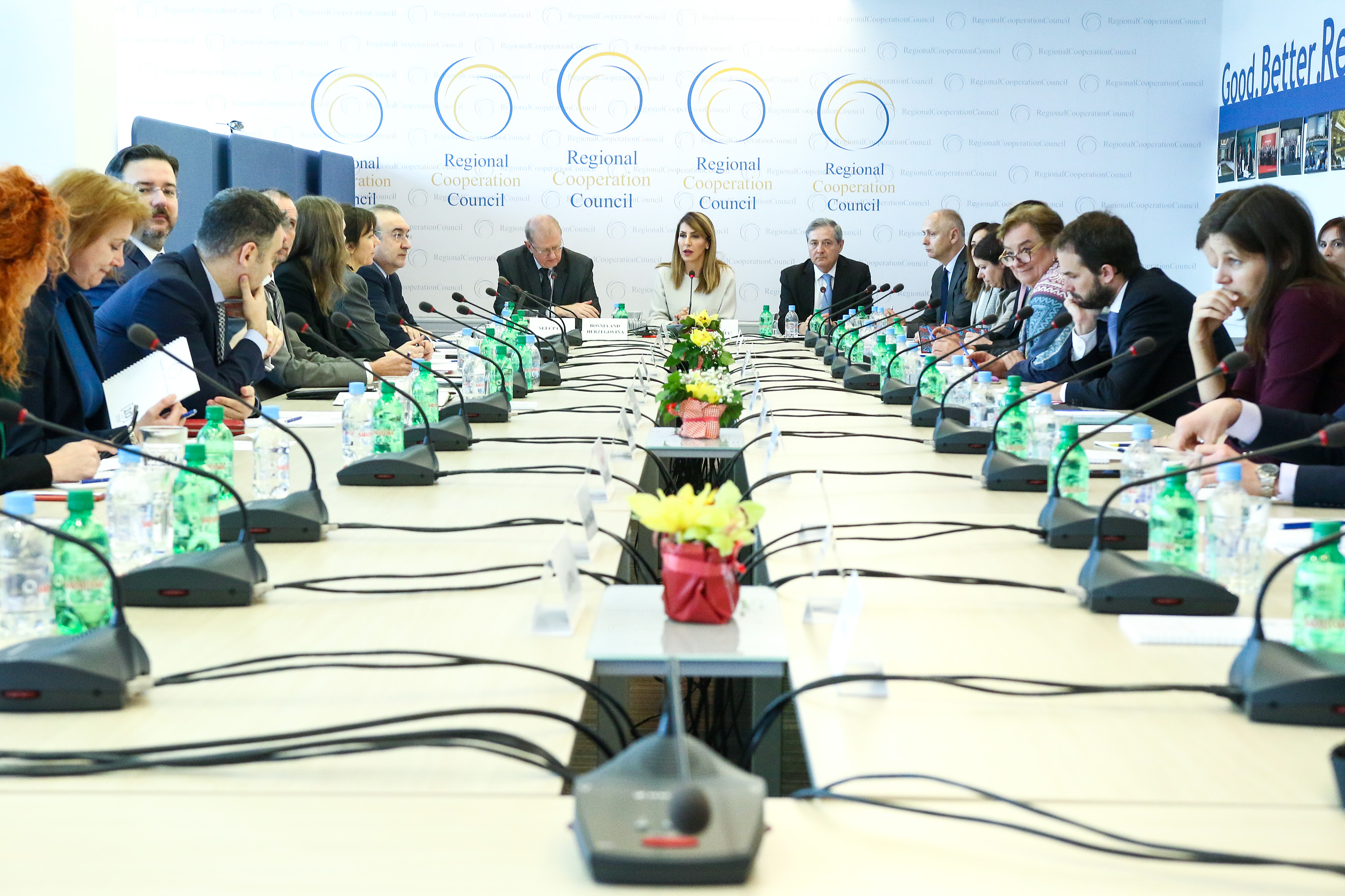 RCC Board met for the 36th time with the new RCC Secretary General, Majlinda Bregu, chairing the meeting for the first time, in Sarajevo on 14 March 2019 (Photo: RCC/Armin Durgut) 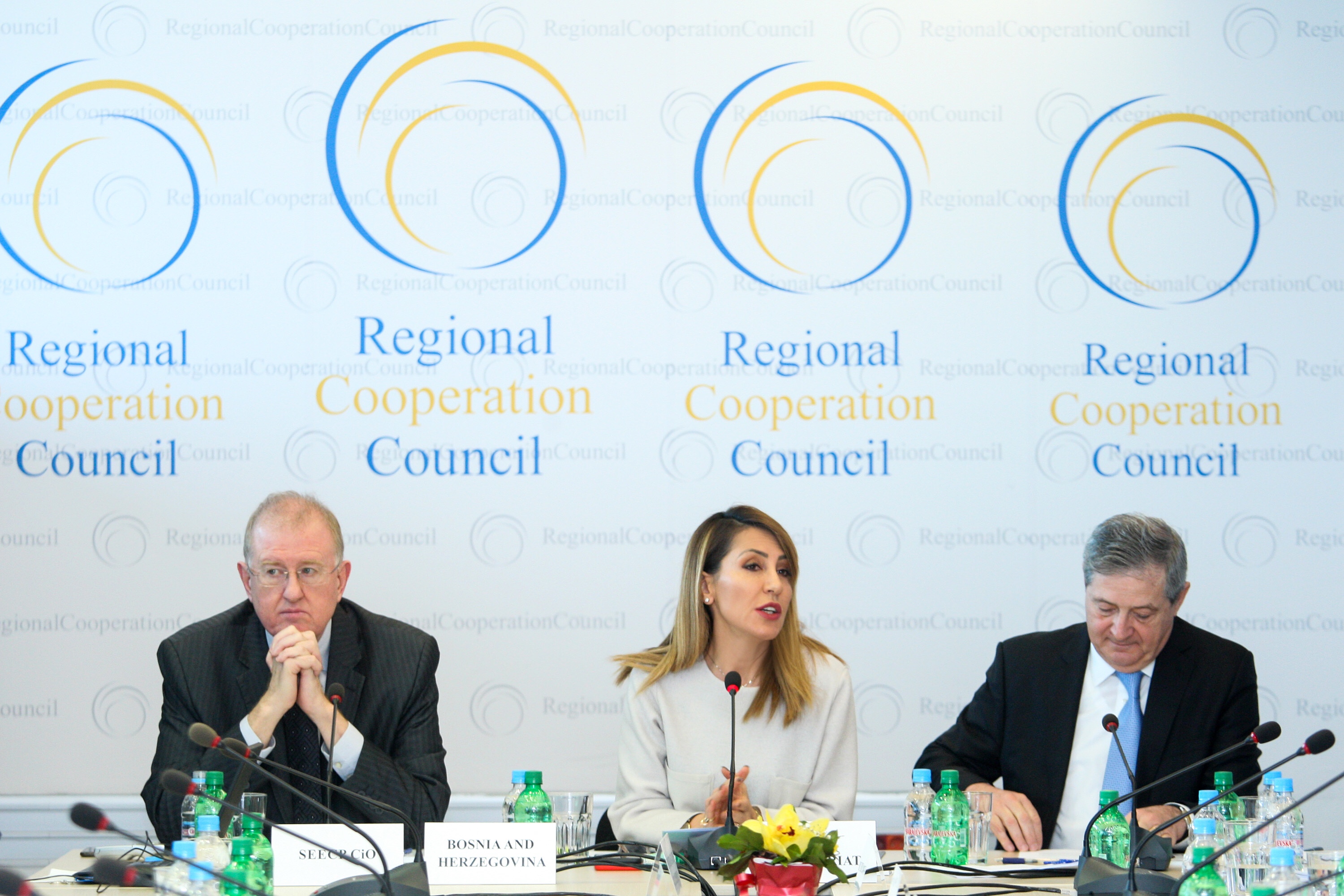 RCC Board meets for the 36th time with the new RCC Secretary General, Majlinda Bregu, chairing the meeting for the first time

Sarajevo – Secretary General of the Regional Cooperation Council, Majlinda Bregu, for the first time since the inception of the duty, chaired the meeting of the organisation’s Board at the RCC Secretariat offices in Sarajevo, yesterday.

The Secretary General Bregu welcomed the Board participants and expressed her pleasure to serve in this function, stressing that the RCC will continue to be devoted to accomplish its mission by a collective effort and involvement of all participants.

“The challenges in front of us will be even bigger –enhancing regional cooperation in time of uncertainty and nailing the expectations on the Berlin Process vis-à-vis the EU integration of the region. It is realistic to expect EU’s internal agenda will affect the process of its WB enlargement. At the same time the WB credibility and determination to fulfil criteria and join the EU will be tested as well. Capability and willingness to overcome bilateral disputes will challenge RCC’s vision and influence the coming years’ activities. But no matter how challenging that might be, the RCC participants need to prove their potential and reset the regional cooperation and integration agenda in the forthcoming period. Political will and leadership are key ingredients to succeed in the process of regional cooperation.”

The 36th regular meeting of the RCC Board accepted the Report on the activities of the RCC Secretariat from 15 October 2018 until 1 March 2019 including key activities of the organisation in this period. They were also briefed by the RCC experts on the main developments under the current Strategy and Work Programme (SWP) 2017-2019, draft of the SWP for upcoming 3-year period (2020-2022), and on the deliverables and challenges until the 2019 Western Balkans Summit in Poznan, Poland, this summer.

“The region has seen improvement and has a positive economic prospects. Over the past several years, it has experienced uninterrupted economic growth, with an analyst consensus that this trend will continue in the medium term, projected to solidify its upward trend, reaching 3.5 percent in 2019 and 3.8 percent in 2020. It is imperative for our region to connect more with each other, reconcile through economic development, to exchange skills, experiences, ideas, knowledge, and heritage, so to become a better, richer, future-oriented region.”

The Board participants also heard the Information on the Coordination Meeting between the Troika of the South-East European Cooperation Process (SEECP), the RCC and the European Union (EU). RCC is working closely with the SEECP Chairmanship-in-Office currently held by Bosnia and Herzegovina, assisting with the preparations for the assumption of Chairmanship by Kosovo* later this year.