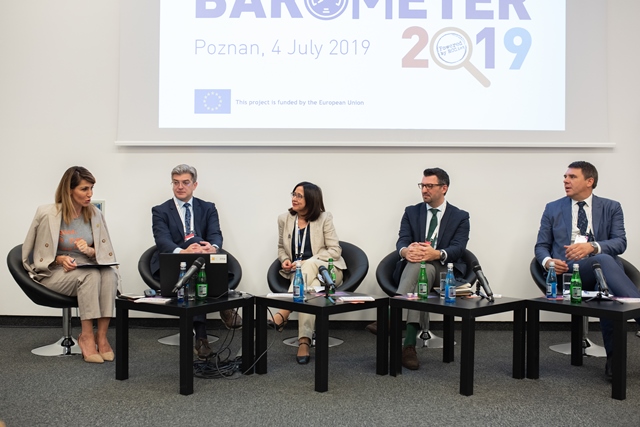 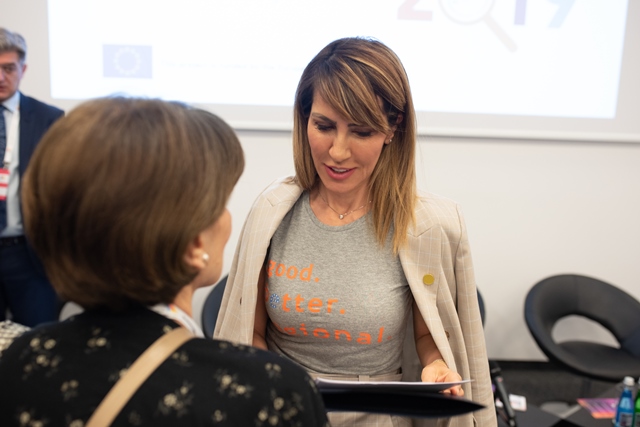 Poznan – “There's no better way to stress the need for stepping up the regional cooperation than quoting the citizens and businesses of the Western Balkans (WB) who overwhelmingly, with 74% and 67% respectively, believe in regional cooperation. The recent success with dropping of roaming charges WB-wide as of 1 of July is an example of how regional cooperation is becoming a steady pattern for bringing up the tangible results of improvement to our citizens and we need to keep capitalizing on that”, said Majlinda Bregu, Secretary General of the Regional Cooperation Council (RCC) today, during the presentation of the 5th edition of the RCC's opinion survey Balkan Barometer 2019 at the RCC-hosted panel 'Stepping up the regional transformation efforts to advance the EU integration path' at the Western Balkans Summit in Poznan, Poland.

„The similar pattern applies to European integration of the region: 64% of businesses and 56% of citizens (for the first time in 5 years of Balkan Barometer over a half of the surveyed citizens were supportive), and this is especially case with the youth with 61%, consider it a good thing. But it is not all that well: for 60% of our citizens unemployment is dominant concern, and they increasingly worry about corruption and brain drain (over 5 years percentage of those concerned has risen from 16-26% and from 0-13% respectively). This is probably why 39% of them consider leaving their homes, to look for a job abroad. “

69% of citizens estimate their socio-economic status as average, while 26% say it is below average, and 16% were unable to afford basic supplies! What is worrying is that there is an 8% drop in employment figures – only 34% declared themselves employed, while in 2018 that percentage was at 42%. 62% of WB businesses say their employees are men. Encouraging is that 40% businesses say they plan to employ new workers in the coming year.

Overall, satisfaction on the situation in the region is steadily improving and from 35 points in 2015, now is at 44 points out of 100, which is still less than a half. Businesses are more optimistic, with 61 points, which is a huge uptake from 47 point 4 years ago.

“To conclude this short overview, I will say that 53% of Western Balkans believe commercial and trade links within the region should improve. The region can deliver and therefore should do much more to strengthen regional cooperation pursuing the EU-integration agenda, to achieve concrete results, like the recent success with the regional roaming agreement that in less than 3 months moved from signing to implementation phase. On the other hand, there are equally big expectations from the EU – to reward the efforts and results, giving more incentive to both individual economies and the region as a whole,” added Bregu.

More information on Balkan Barometer is to be found at www.rcc.int/seeds/

The presentation of the Balkan Barometer's 2019 key findings was followed by the panel, moderated by the Secretary General Bregu, including Genoveva Ruiz Calavera Director for Western Balkans at the European Commission's Directorate-General for European Neighbourhood Policy & Enlargement Negotiations; Miro Cerar, Minister of Foreign Affairs, Slovenia; Aleksandar Drljevic, Chief Negotiator with European Union, Montenegro; Srdjan Majstorovic, Chairman of the Governing Board of the European Policy Centre,  and Sanjin Arifagic, Regional Economic Expert. The panellists discussed the current status of the regional cooperation in the region in the light of Balkan Barometer findings, further reviewed the progress achieved by the Western Balkan economies in advancing the regional cooperation, EU integration and transformation agenda as well as pinpointed further areas of joint work.

The RCC team, led by the Secretary General Bregu, also took part in the opening session of the Poznan Summit, ‘Navigating the Future: How to Prepare for the Revolution in Trade, Services and Industry’. Later in the day, the RCC will host a panel discussion dedicated to integration of Roma population in WB societies ‘Western Balkans partners declaration on Roma and EU enlargement: From words to acts’.