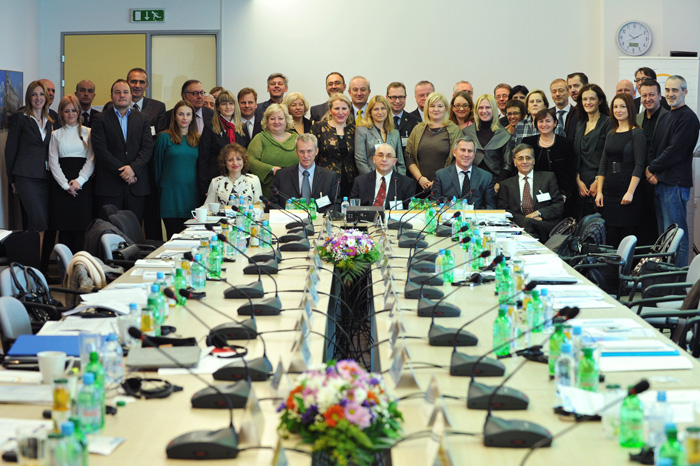 Participants of the international seminar ‘South East Europe 20 Years On: Transformation from State to Public Broadcasting’, held in RCC premises on 14 November 2011, in Sarajevo, Bosnia and Herzegovina. (Photo RCC/Midhat Poturovic)

SARAJEVO – The economic standing, editorial independence and autonomy of public service media need to be improved, to avert political interference, achieve managerial stability, ensure sustainability and stable funding for the public service media, in order for them to fulfill their role, concluded participants of an international seminar on public broadcasting, held in Sarajevo today.

The event was co-organized by the European Commission (EC)’s Enlargement Directorate-General and the Regional Cooperation Council (RCC) Secretariat, with support of the European Association of Public Service Media in South East Europe and the European Broadcasting Union (EBU).

In his opening address, Rudo Vidović, Minister of Communications and Transport of Bosnia and Herzegovina, commended RCC efforts to find the best model for an efficient regional cooperation.

“By taking part in such initiatives, Bosnia and Herzegovina has demonstrated clear commitment to development of pluralism, democratic society and free media as the only way towards having a modern, stable and developed country.”

Welcoming the participants, RCC Secretary General Hido Biščević said that South East Europe and its broadcasters had gone a long way over the past 20 years of transformation from state to public broadcasting, often under very difficult conditions.

“Transformation under the circumstances of a complex heritage of the past has required a serious mind- and value-shift. But, despite the difficulties, the progress is evident, in terms of improved legislative framework, freedom of expression and professionalism.”

Still, a number of challenges remain, as pointed out by Andris Kesteris, Principal Advisor on Civil Society and Inter-institutional Relations at the EC’s Directorate General for Enlargement.

“Editorial independence of media outlets starts with achieving their economic and financial sustainability and autonomy. Public service media are not an exception, and a reform in this respect should be embarked upon. ”

Kesteris underlined that the seminar is the first regional event dedicated to public service media with support and participation of the European Commission, following the adoption of the 2011 Enlargement Package.

Josip Popovac, President of the European Association of Public Service Media in South East Europe, explained that almost all public service media in the region have similar problems, which is why they formed the Association.

“Preconditions for successful public service media are political and economic independence, stable financing and public supervision. Their future depends on maturity of democracy, development of civil society, trust in regulation, and nourishment of independent journalistic professionalism. Cultural and social value of public service media must be above their market value and political attempts to control them.”

The participants recommended a future course of action in support of freedom, independence and sustainability of the public service media, through seminar conclusions, which will be available HERE through the course of the week.

The seminar has been organized in response to the EC’s Speak Up! Conference on freedom of expression and the media, held in Brussels in May 2011, that dedicated significant space to issues of importance to the public service media.