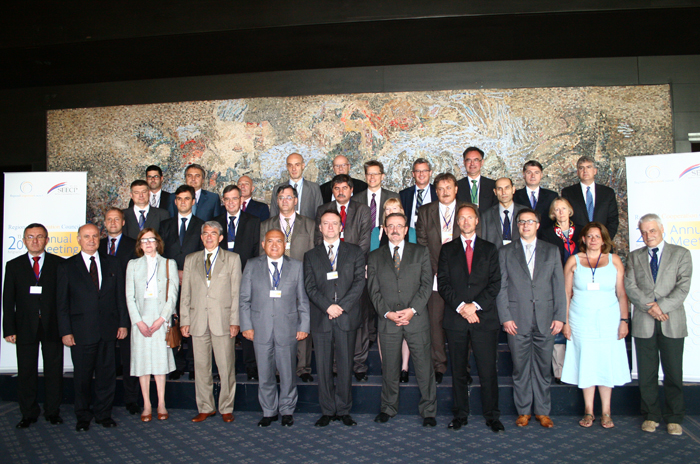 BELGRADE/SARAJEVO – The 4th Annual Meeting of the Regional Cooperation Council (RCC) endorsed in Belgrade today the Annual Report of the organization’s Secretary General and the nomination of Goran Svilanovic as the next RCC Secretary General for a three-year period, effective as of 1 January 2013.

The meeting, co-chaired by the RCC Secretary General Hido Biscevic and Serbian Foreign Ministry State Secretary Ivan Mrkic, on behalf of the current chair of the South-East European Cooperation Process (SEECP), discussed developments in regional cooperation in South East Europe (SEE) within the RCC framework, as well as challenges ahead of the organization.

While presenting the Annual Report, Secretary General Biscevic said that the RCC Secretariat worked for the common benefit of the region on an all-inclusive platform for cooperation, despite remaining unresolved issues in many parts of South East Europe.

“Precisely because of a reflection of the remaining unresolved issues on political relations in the region and an advancement of the EU agenda of our countries, there is a need for a consolidated, more effective and sustained regional cooperation. The SEE countries need to assume a greater self-responsibility in providing political support in favour of large scale regional projects, especially in infrastructure, and in translating genuine political commitments into concrete implementation action and follow-up.”

“Today we are half-way through the implementation of the RCC Strategy and we have delivered on almost 2/3 of the assigned tasks, such as the transfer of the management of South East European Investment Committee (SEEIC) from the Organisation for Economic Cooperation and Development (OECD) to the RCC, the implementation of the Regional Strategic Document on Justice and Home Affairs, the regional cooperation mechanisms in defence sector, the start of work of the Task Force on Culture and Society, and important steps forward made in the media development.”

The RCC Secretary General thanked the Serbian Chair and all the RCC members for their support and contribution to enhancing regional cooperation in SEE through the RCC over the past five years.

State Secretary Mrkic expressed high appreciation for RCC’s engagement in positioning South East Europe in relation to EU institutions and in forming a positive image of the region as a whole.

“We believe that project-oriented regional cooperation is a key for an effective implementation of political and economic priorities of the countries in the region. The Republic of Serbia is interested in improving investment climate, developing energy and infrastructure, fighting organized crime and corruption, cooperating in the field of security, as well as strengthening human resources, promoting knowledge-based economy and modern information technologies.”

During the meeting, the Deputy RCC Secretary General Jelica Minic presented the Secretariat’s Self-assessment Report on the first year of implementation of the RCC Strategy and Work Programme 2011-2013.

The Annual Meeting was co-organized by the SEECP Chairmanship-in-Office of Serbia and the RCC Secretariat. It is held back to back with the SEECP Summit, and meets at the level of Senior Civil Servants or above. It ensures the strategic co-ordination and development of regional cooperation processes, reviews and endorses the organization’s strategy and the Secretary General’s Annual Report on regional cooperation.

For further information, please see the 2011-2012 Annual Report of the RCC Secretary General on regional cooperation in South East Europe and the RCC Strategy and Work Programme for 2011-2013, as well as Annual Meeting materials (introductory speeches, agenda, programme, list of participants, etc.).