RCC’s Balkan Barometer 2018: Satisfaction of people and businesses on overall situation in the region is steadily improving 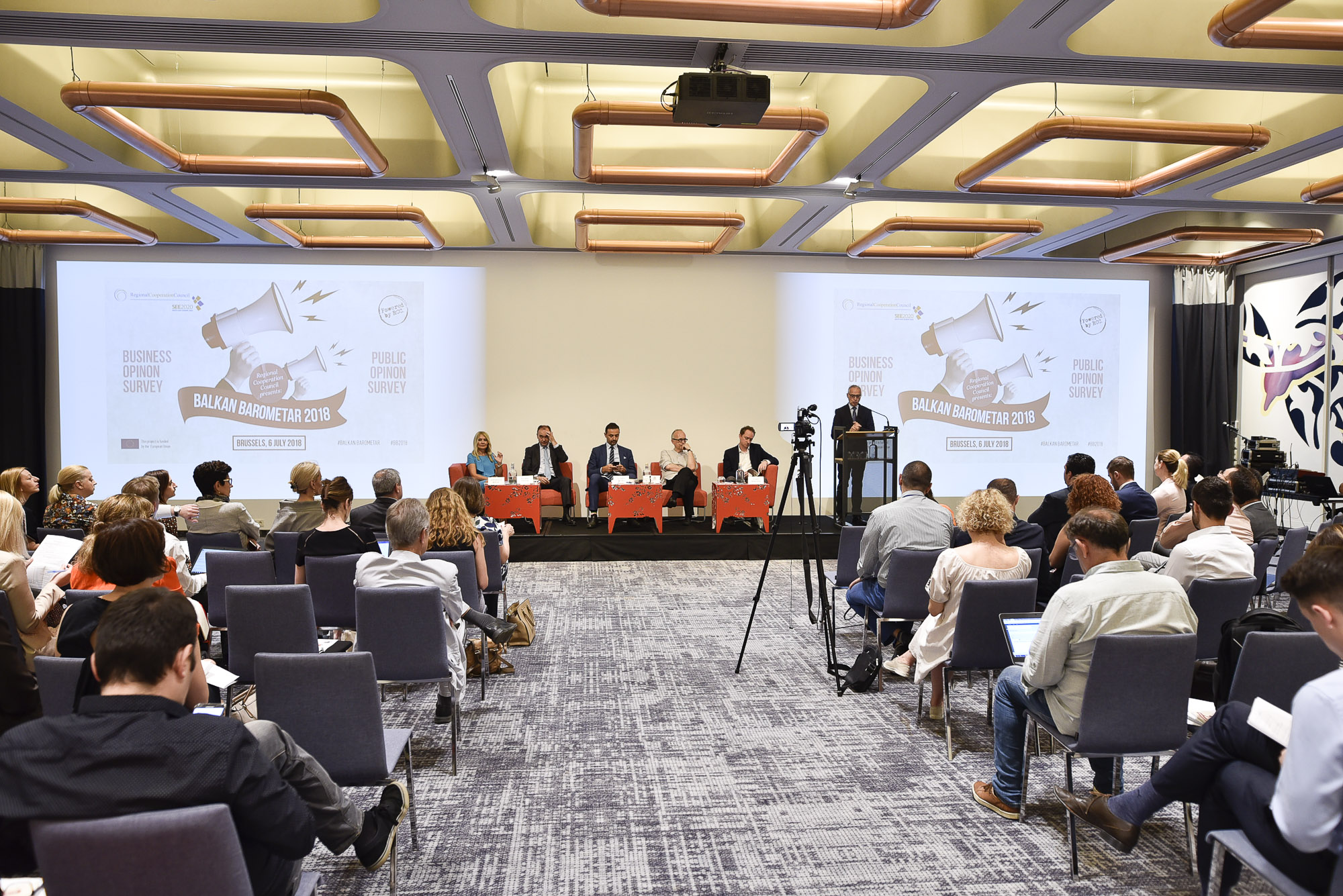 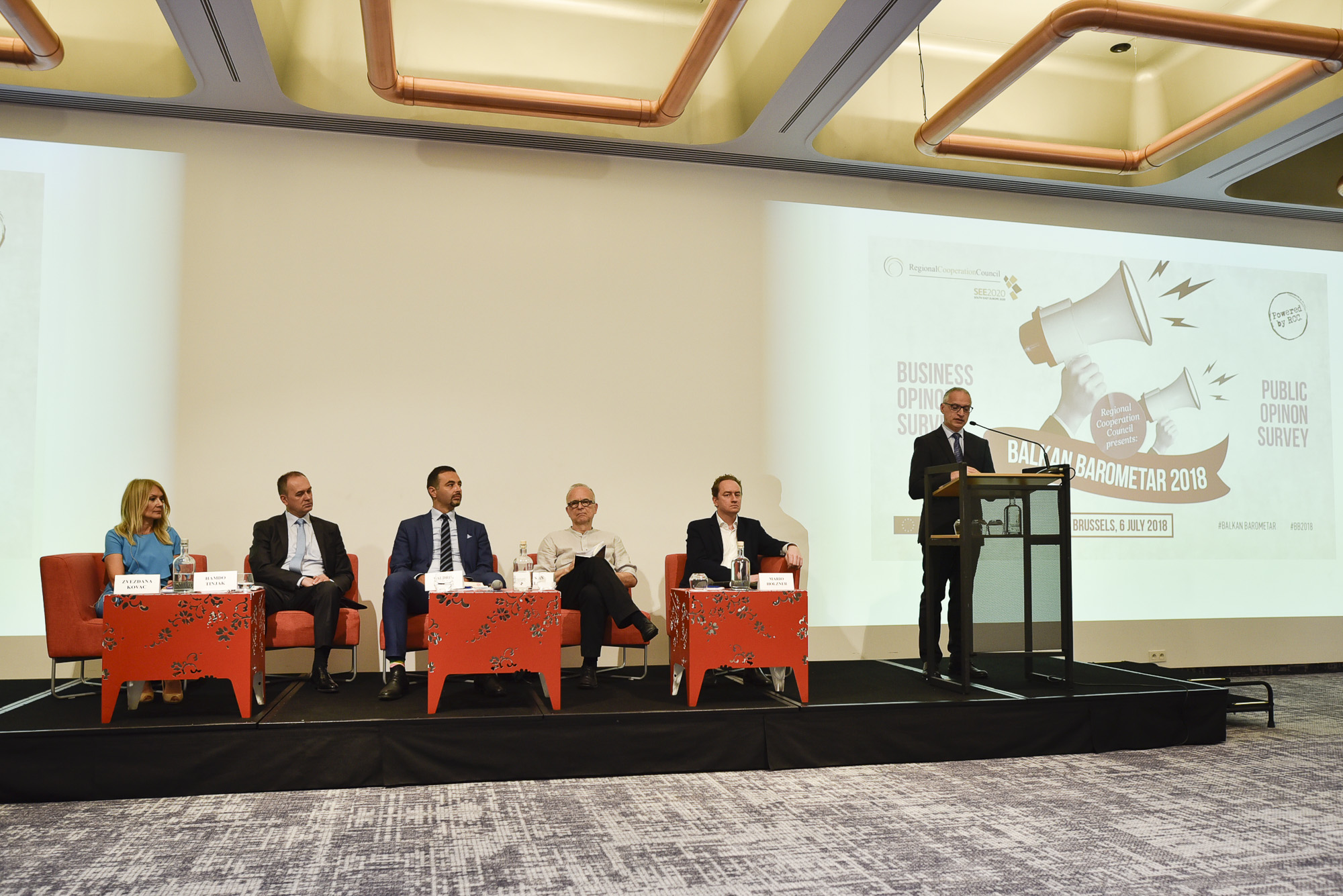 Brussels – The Regional Cooperation Council (RCC) revealed results of 2018 edition of the Balkan Barometer (BB), an annual survey of citizens and business communities’ opinion on the situation in the region, in Brussels today. The main findings of the survey show that the satisfaction of people and businesses on the overall situation in the region, while still below average, is steadily improving.

“Public sentiment index has risen by 7%, from 35 % in BB 2015 to 42% in BB 2018, while region’s businesses positively assessed both the present situation and prospects, with estimations of both the current situation and the forecast for the future overwhelmingly positive, on a scale from 1 to 100 they rated it 62 vs. 47 in BB 2015. This is an encouraging trend that instils optimism for the coming years,” said RCC Secretary General Goran Svilanovic.

“And although unemployment is still seen as the most important problem facing the region, interestingly, brain drain/emigration is increasingly seen as a major challenge by the region’s citizens, as 12% of them said so, which is 5% more than in BB 2015. However, we hope to see changes to these numbers to the better, already in the next year as the report on implementation of the Multi-Annual Action Plan for Regional Economic Area (MAP REA) in the Western Balkans six economies notes significant improvements in all four areas: Trade, Investments, Mobility and Digital Integration, leading towards generating new jobs and more economic stability in the region.”

The BB 2018 also shows low trust in political institutions, with still evident and widespread citizens’ apathy, as the majority of respondents note their reluctance to engage in government decision making - 46% do not even discuss the government's decisions; 32% discuss them privately and outside of a public setting; only 9% protest; 6% comment on the government's decisions on social networks and; 4% participate in public debates. This is a major threat to the region’s future democratic development. On the other hand, some progress was made in government performance across a number of indicators that should serve as a precursor for a more serious effort to reform how governments go about their business.

When it comes to the opinion on region’s economies’ EU accession prospects results are mixed. Compared to 27% in BB 2015, only 12% of respondents today foresee their economy joining the EU as early as 2020. However, at the same time, there is a marked increase in the number of respondents who anticipate accession by 2030 - from 14% in BB 2017 to 20% now. 26% think it would never happen, which is a slight progress from the last year when 28% of people thought so.

Genoveva Ruiz Calavera, Director for the Western Balkans at the European Commission’s (EC) Directorate-General for European Neighbourhood Policy and Enlargement Negotiations (DG NEAR) said she was happy to say that the region slowly regains trust in the EU integration process and that reforms and changes associated, although difficult at first, are designed to the benefit of all the citizens.

“There are no shortcuts in preparations of the region to join the EU, but the Union is here to provide support and help our Western Balkans partners to get ready for that moment. Also,  our member states are to prepare themselves to welcome you to EU. The RCC here is a part of that support process and their assistance in facilitating cooperation on many fronts was and continues to be instrumental – the EU is based on regional cooperation and good neighbourly relations and this is what we want to see in our partner WB economies, as it is vital for the integration.”

Region’s businesses are slightly more optimistic than the population. 40% of company leaders report improvement in their business situation over the previous year. 33% of businesses expect to increase the number of employees and only 8% feel they would have to decrease it over the next year, while 55% expect no change! 45% of business leaders still see their economy as a good place to invest.

A part of the RCC’s BB 2018 launch is a panel discussion including Valdrin Lluka, Minister of Economy Kosovo*; Hamdo Tinjak, Secretary of the Ministry of Foreign Trade and Economic Relations of Bosnia and Herzegovina; Dusan Reljic, Head of ‘Stiftung Wissenschaft und Politik’ at German Institute for International and Security Affairs; and Mario Holzner, Institute Deputy Director and Staff Economist at the Vienna Institute for International Economic Studies. The discussion moderator is Zvezdana Kovac, Executive Director of the Center for Democracy and Reconciliation in Southeast Europe.

Balkan Barometer (BB) is an annual opinion survey commissioned by the RCC and conducted by GfK, collecting and analysing data from region's citizens and businesses across a variety of thematic areas such as employment, trade, investments, corruption, etc. Its 4th edition included 6000 citizens and 1200 companies.