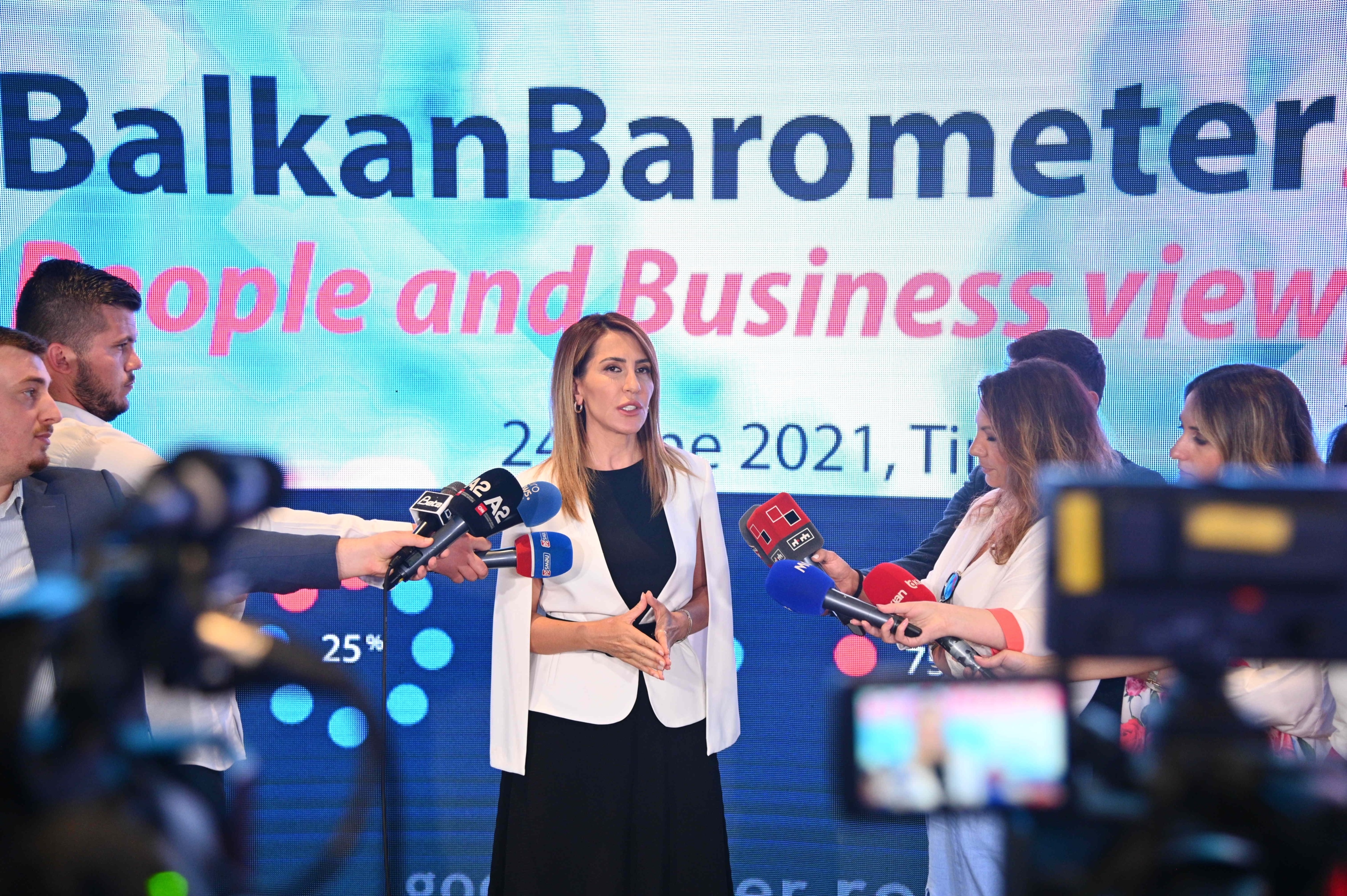 Tirana – “This, seventh in a row, Balkan Barometer shows human uncertainty and vulnerability are the main concerns followed by some goodish news which is the consciousness about the benefits of regional cooperation. For 49% of Western Balkan citizens, unemployment is the biggest problem, as it is for young people as well, while 46% are most worried about the economic situation. Pandemic shifted opinions and influenced realities. People are more hesitant to leave and work abroad – 37% of citizens would do it – a decreasing trend in comparison with last year,” said Majlinda Bregu, Secretary General of the Regional Cooperation Council (RCC), at the Balkan Barometer (BB2021) presentation in Tirana today.

“As we anticipated last year, a neighbour in need is a neighbour indeed. WB citizens have increased their support to regional cooperation and EU. Balkan Barometer records continued growing support for regional cooperation with 77% of citizens, whilst 69% of businesses see the quality of regional cooperation as important for their business. In the same vein, support for EU integration and accession has significantly increased during the pandemic year, despite the slowness of the enlargement process. 62% of respondents see EU membership as a good thing, as do 66% of businesses. The vast majority of Western Balkan citizens – 73% perceive EU as the most preferred block to trade with, while the Union tops the first place as the most supportive in anti-pandemic efforts by 43% of respondents through medical and financial help – well ahead of China – 14%, Turkey – 9% or Russia – 7%,” added Bregu.

Deputy Head of Unit Western Balkans Regional Cooperation and Programmes at European Commission (DG NEAR) Alessandra Viezzer join the RCC Secretary General Ms Bregu in opening the event, pointing out the importance of this survey for the Western Balkans.

“Western Balkan businesses note they will undoubtedly benefit from travelling across the region with ID cards – an agreement being negotiated as part of the Common Regional Market agenda. 61% of respondents support this initiative, as travelling between some of the economies of the region is facing further hurdles. Regional Roaming Agreement has helped almost half of respondents to save money on phone costs (48%). This gives a positive stimulus in the run-up to an important 1st of July milestone – when the roaming charges will be reduced to zero within the region,” said Ms Bregu concluding the event.

While originally launched as an attempt to measure impact of regional actions implemented under the South East Europe (SEE) 2020 Strategy, the Barometer is now firmly established as a reliable source of regional data widely employed and referenced by media, business, civil society and decision-makers alike. It remains an independent guide to attitudes towards cooperation and integration, as well as attitudes to other key policy areas both at domestic and regional level that affect the daily lives of the Western Balkan citizens and businesses.

Cover footages from the launch