RCC Board reviews progress in implementation of organization's 2011-2013 strategy 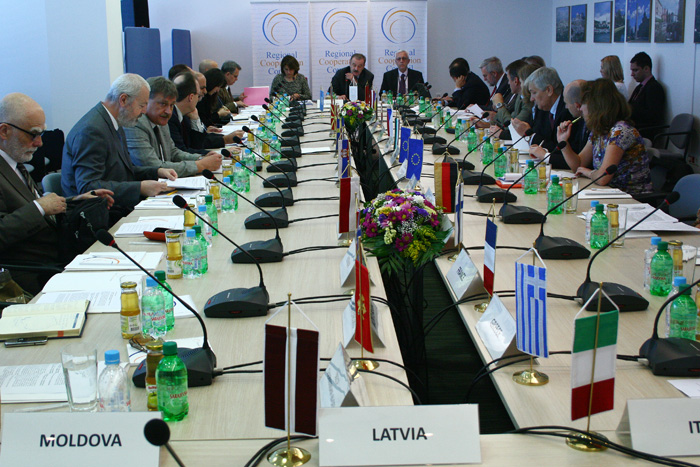 Meeting of the RCC Board held in Sarajevo, BiH, on 12 May 2011. (Photo RCC/Selma Ahatovic-Lihic)

The second meeting of the Board of the Regional Cooperation Council (RCC) in 2011, held in Sarajevo today, reviewed work of the RCC Secretariat over the past two months and discussed its future activities.

RCC Secretary General Hido Biscevic presented a report on the activities of the organization’s Secretariat for the period 9 March-9 May 2011.

“Over this period, South East Europe was on a positive move in terms of European Union accession and improved political climate”, said Secretary General Biscevic. “Remaining challenges, however, still require additional efforts on part of the RCC to deliver and be able to fully implement its three-year strategy.”

Biscevic called upon the RCC members from South East Europe to work together to reinvigorate the spirit of cooperation, rapprochement and reconciliation in the region.

The Board heard an overview of the current status of implementation of the RCC Strategy and Work Programme 2011-2013, prepared by the organisation’s senior experts.

The Annual Report of the RCC Secretary General on regional cooperation in South East Europe 2010-2011 was presented and accepted by the Board members.

The participants were also updated on coordination activities between the South-East European Cooperation Process (SEECP) Troika (Turkey, Montenegro and Serbia) and the RCC Secretariat, in view of preparations for the RCC Annual Meeting and SEECP Summit at the end of June.

The region’s national coordinators for EU’s Instrument for Pre-accession Assistance (IPA) programme took part in the meeting, in an RCC effort to facilitate greater coordination in design and implementation of national and regional IPA projects.

The organization’s Board meets quarterly and is chaired by the RCC Secretary General. The Board provides the RCC with operational guidance and supervision. It consists of those RCC members contributing to the budget of the RCC Secretariat as well as the European Union, represented by the Troika, consisting of the EU Presidency, the European Commission and the Council Secretariat.

The RCC Secretary General’s quarterly Report on the Activities of the Regional Cooperation Council Secretariat is available HERE.