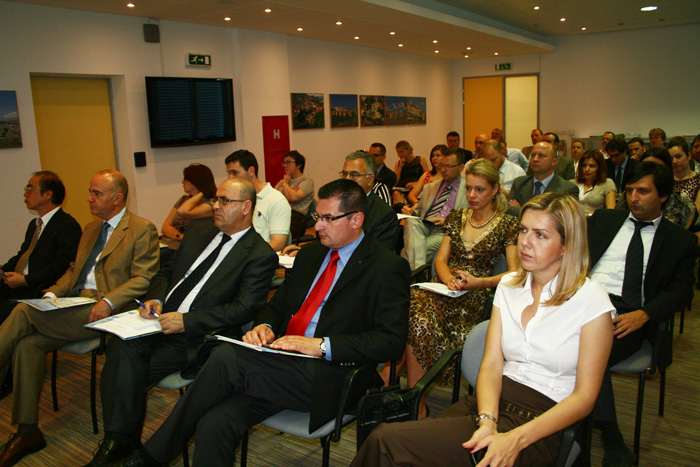 The RCC Secretariat briefs the diplomatic community in Sarajevo of results of the 4th Annual Meeting of the organization and the related SEECP events, held in Belgrade on 12-15 June 2012. Sarajevo, Bosnia and Herzegovina, 22 June 2012. (Photo RCC/Selma Ahatovic-Lihic)

The Secretariat of the Regional Cooperation Council (RCC) briefed today the diplomatic community in Sarajevo of results of the 4th Annual Meeting of the organization and the related South-East European Cooperation Process (SEECP) events, held in Belgrade last week.

RCC Secretary General Hido Biscevic informed that the organization’s members emphasized the crucial RCC role in boosting cooperation and supporting European integration in South East Europe. They reconfirmed their full support to the organization, underlining that it has become a well-established, trusted and reliable partner in building and strengthening ties among countries and in promoting stability, reconciliation and prosperity in the region.

Representatives of 46 RCC members, the SEECP Heads of State and Government, as well as the Ministers of Foreign Affairs, expressed gratitude for the work of the first and outgoing RCC Secretary General Hido Biscevic. The Ministers appointed and the Heads approved of Goran Svilanovic as the new Secretary General as of 1 January 2013.

“Since the last RCC Annual Meeting and after four and a half years of our work, the region reached a point of crucial decisions regarding its EU future, advancement in the process of reconciliation and rapprochement, relaxed and widened human contacts, and more concrete regional cooperation”, said Biscevic.

“Ways will now have to be devised to ensure a solid, uninterrupted cooperation based on a greater regional responsibility, a genuine political commitment and an effective capacity in the RCC members from South East Europe to implement commitments made at the regional level.”

The briefing gathered some 25 representatives of the diplomatic community in Sarajevo.

The Annual Report of the RCC Secretary General on regional cooperation in South East Europe 2011-2012, outlining the achievements, is available at the RCC website www.rcc.int. Follow us at twitter.com/rccint.