INTERVIEW with Leonard Demi, Chairman of the National Security Committee of the Albanian Parliament

Mr. Demi, how do you assess the current level of regional cooperation on security matters in South East Europe?

The peoples of South East Europe (SEE) are joined by a common civilization and common belief in the moral and political values of liberal democracy and European standards. Generally, they share a common vision of a peaceful South East Europe fully integrated within the Euro-Atlantic community, dedicated to democracy, the rule of law, and respect for human rights and fundamental freedoms. The countries of the region are committed to promoting close bilateral and multilateral political and security relations through international and regional organizations such as North Atlantic Treaty Organization (NATO), European Union (EU), Adriatic Charter (A-5), South-East European Cooperation Process (SEECP), Regional Cooperation Council (RCC), Southeast European Co-operative Initiative (SECI), different forums, etc., which, I believe, should be deepened further in developing joint approaches to the threats of the region.

What do you see as the main challenges for the region security-wise in the upcoming period?

The United States, NATO, and the EU helped the Western Balkans move from war to peace, from disintegration to sustainable development and to a Euro-Atlantic future.

Security policy changes in South East Europe can be defined most appropriately in the framework of Euro-Atlantic integration and re-nationalization. In that regard, three principal issues still raise concern: the political situation in Bosnia and Herzegovina, Kosovo’s consolidation, and the ongoing dispute between Greece and [The Former Yugoslav Republic of] Macedonia over the latter’s name, including the improvement of inter-ethnic relations by continuing to implement both the letter and spirit of the Ohrid Framework Agreement. As a matter of fact, the danger of new wars threatening the stability of the entire region is assessed as practically non-existent, but this fact does not totally exclude any internal local conflicts. However, the potential threats and risks in the Western Balkans are: weakness of institutions, corruption, organized crime and terrorism.

The most significant structural problem of the Western Balkans is the weakness of state institutions, which is linked to nearly all security threats, potential threats and risks in the countries of the region. In modern political regimes states are tasked with establishing and guaranteeing frameworks regulating the economic and political activities of the society. Besides, the legal and institutional frameworks established by the state in accordance with international standards, including their functioning in compliance with these standards, ensures the accession of individual states to the international economic and political system. If such frameworks fail to function satisfactorily, subsystems of society related, inter alia, to the economy, the judiciary and politics – will also become dysfunctional, both internally and externally. This issue is of particular importance in the case of states which are unable or hardly able to modernize without international assistance (in the Western Balkans, it should be emphasized that the main criticism with regard to the weakness of institutions relates to the practical operation of institutions and not their lack of existence.).

The other structural problem – economic underdevelopment – has a significant influence on the security of the Western Balkans.

Corruption is deeply rooted in the region and involves the political elites and state institutions. Corruption is widespread and remains a serious problem, especially within state bodies and government institutions[1].

Terrorism can be classified as a risk to the security of the region. Terrorism-related illegal activities in various parts of the region (such as financing terrorist groups, supplying them with weapons and explosive materials, and providing safe havens for terrorists/terrorist groups, etc.) should be taken under control and require specific consideration.

In your mind, what are the common goals that the region should be striving for when it comes to security of the region as a whole and the countries individually?

Euro-Atlantic integration and the burden of achieving, that goal lies with the leadership and the peoples of the SEE. One of the most promising developments of the last decade is the increasing realization among countries in the region that their prospects rise and fall together. This understanding has spurred the steps toward regional cooperation and ethnic reconciliation that we have seen, though there is still more to do. As a Member of the Albanian Parliament, I believe in parliamentarians’ insuperable strength for further democratic consolidation and transformation of the whole region reaching a dynamic transatlantic partnership for the 21st century. Taking advantage of this opportunity, I would like to put forward the proposal we made in Tirana, on 7-8 December 2009, to set up a Parliamentary Assembly of South East Europe as an inter-parliamentary organization, which will promote close bilateral and multilateral political and security relations among the countries of South East Europe.

How do you see the role of the Regional Cooperation Council in the process of improvement of overall security cooperation in the region, having in mind that its Strategy and Work Programme for 2011-2013 has been endorsed by the Heads of State and Governments of the South-East European Cooperation Process (SEECP)?

I have been delighted to welcome the role of the Regional Cooperation Council in the process of improvement of overall security cooperation in the region, and I am looking forward to a closer cooperation.

Leonard Demi has been the Chairman of the National Security Committee of the Albanian Parliament since 2005. He graduated Albanian Philology at the University of Tirana and has studied Foreign and Security Policies in Hebrew University, Jerusalem; George Washington University; and Naval Postgraduate School, Monterey, CA, USA. He holds different scientific degrees. Mr. Demi lectures at the University of Tirana and Defense Academy of his country. He has written and published many books and articles in Albania and abroad. 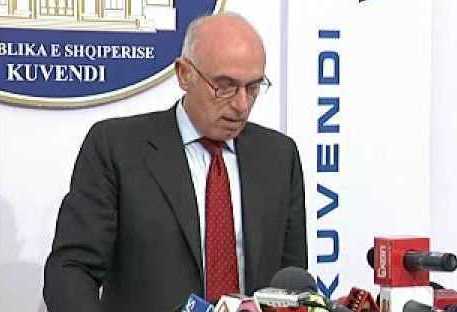 Leonard Demi, Chairman of the National Security Committee of the Albanian Parliament (Photo/http://www.gatopardos.com)