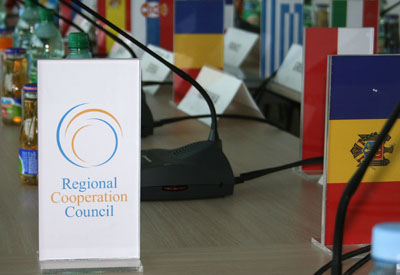 The RCC Board meets quarterly and provides the RCC with operational guidance and supervision. (Photo RCC/Selma Ahatovic-Lihic)

SARAJEVO – The Secretary General of the Regional Cooperation Council (RCC), Hido Biscevic, presented his latest quarterly report on the activities of the RCC Secretariat to the 29 members of the organization's Board, who gathered in Sarajevo today. The report covers the period between 9 May and 9 September 2009.

Secretary General Biscevic received full support of the RCC Board to the Secretariat's activities. He informed the members of the situation in South East Europe and the main challenges the region is facing in implementing development programmes.

“There were several important developments and trends influencing the regional cooperation in South East Europe and the RCC framework over the past months”, said Biscevic. “The effects of the economic crisis became additionally exacerbated and its economic and social ramifications are likely to exert an influence on regional cooperation capacities of individual RCC members in the short and medium term.”

“In addition to this, the pace of European and Euro-Atlantic integration process for candidates and potential candidates from the region, despite some objectively positive steps, is in need of new vigour and more resolute commitment.”

The RCC Secretary General also highlighted the importance of abiding by the principle of all-inclusiveness of regional cooperation in the RCC context. He stressed that the Secretariat successfully worked with its members on a number of projects in the priority areas of economic and social development, infrastructure and energy, justice and home affairs, security cooperation, building human capital and parliamentary cooperation in South East Europe.

“These projects have supported public-private partnership, integrity and resistance to corruption of the criminal judicial system, design of regional strategy for research and development for the Western Balkans, transboundary water management, etc.”

“Moreover, preparations for establishing a South East Europe Firefighting Regional Centre (SEEFREC) were further advanced, in cooperation with the World Bank and UN International Strategy for Disaster Reduction, and with an active engagement and support of a number of interested RCC members from South East Europe.“

The RCC Board was also presented with a proposal by the United Nations Development Programme (UNDP) to establish a regional RCC trust fund. The fund would support the implementation of projects in South East Europe within the RCC priority areas.

The report on the activities of the Regional Cooperation Council (RCC) Secretariat is available HERE.

The RCC Board meets quarterly and provides the RCC with operational guidance and supervision. It consists of those RCC members contributing to the budget of the RCC Secretariat as well as the European Union, represented by the Troika, consisting of the EU Presidency, the European Commission and the Council Secretariat.