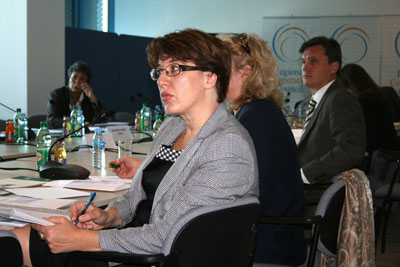 SARAJEVO – A panel of high-level experts from South East Europe (SEE) met in Sarajevo today to stimulate in depth discussion on regional response to global economic crisis. The first such meeting in the region was held under the auspices of the Regional Cooperation Council (RCC) Secretariat.

“The projects and ideas from this panel will be presented to the RCC members from SEE for review and endorsement, and then, after thorough elaboration and coordination, they are expected to become a useful platform for launching a regional approach to crisis-response strategies in South East Europe, in cooperation with the countries from the region, European Union, and leading European and international financial institutions”, said Hido Biscevic, the RCC Secretary General, who hosted the event.

The panel, composed of the heads of regional organizations and initiatives in SEE the activities of which are of direct relevance for the elaboration of economic and financial measures in response to the crisis, focused on the identification of priority areas and projects of regional character in South East Europe which would ensure accelerated and sustainable economic and social development of the region and raise its infrastructural capacities.

“The panel also discussed a ‘regional platform’ for a high-level conference on the Western Balkans, to be organized by the Swedish Presidency of the EU Council and the European Commission on 9 December 2009 in Brussels, in cooperation with the RCC”, added Biscevic.

“The conference will focus on the impact of the financial crisis on the region, the progress of the enlargement process and the regional development cooperation. It will represent an excellent opportunity for the presentation of the identified projects to the EU institutions and relevant international financial institutions.”

The mandate of the panel has been outlined by the Chisinau Joint Statement adopted at the last Meeting of the Heads of State and Government of the South-East European Cooperation Process (SEECP) Participating States on 5 June 2009.